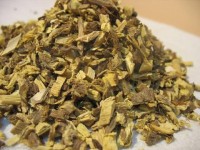 Scientists are reporting identification of two substances in licorice – used extensively in Chinese traditional medicine – that kill the major bacteria responsible for tooth decay andgum disease, the leading causes of tooth loss in children and adults. In a study in ACS’ Journal of Natural Products, they say that these substances could have a role in treating and preventing tooth decay and gum disease.

Stefan Gafner and colleagues explain that the dried root of the licorice plant is a common treatment in Chinese traditional medicine, especially as a

way to enhance the activity of other herbal ingredients or as a flavoring. Despite the popularity of licorice candy in the U.S., licorice root has been replaced in domestic candy with anise oil, which has a similar flavor. Traditional medical practitioners use dried licorice root to treat various ailments,such as respiratory and digestive problems, but few modern scientific studies address whether licorice really works. (Consumers should check with their health care provider before taking licorice root because it can have undesirable effects and interactions with prescription drugs.) To test whether the sweet root could combat the bacteria that cause gum disease and cavities, the researchers took a closer look at various substances in licorice.

The American Chemical Society is a non-profit organization chartered by the U.S. Congress. With more than 163,000 members, ACS is the world’s largest scientific society and a global leader in providing access to chemistry-related research through its multiple databases, peer-reviewed journals and scientific conferences. Its main offices are in Washington, D.C., and Columbus, Ohio.