How bad is your breath? 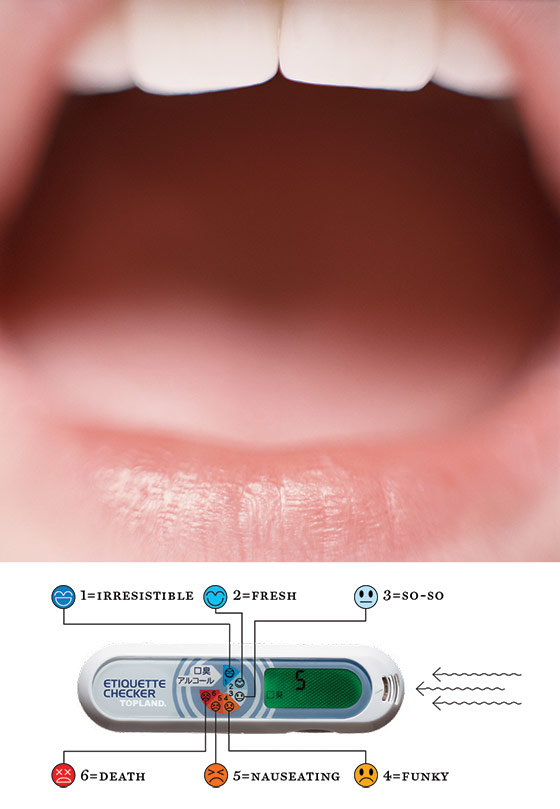 Short of licking your wrist, huffing into cupped hands, or waiting for strangers to recoil in horror, gauging your own breath is no easy task. There are machines that can test it, but they cost thousands of dollars and are typically relegated to dentists' offices. Which is why, five years ago, tech blogs around the world exploded with geek love over the launch of a new Japanese gadget called the Topland Etiquette Checker. The lightweight pocket-size breath analyzer, which looks not unlike a pregnancy test, claimed to measure "ethanol and putrid odor gas."

Though its instructions were in Japanese, its ranking system of happy faces was universal: 1 equaled a minty-fresh, infinitely kissable maw; 6 meant your mouth smelled like a dead animal baking in the summer sun. If the tool worked as claimed, it had the potential to revolutionize social interactions, particularly in office environments or cramped city bars. It could also be a confidence booster—a green light to get close, speak loudly, and know your presence is welcome (or at least not repulsive). The only problem: It wasn't available in New York. Until now. The gadget recently landed at AC Gears (69 E. 8th St., at Mercer St.; 212-260-2269), where it costs $60—a small price to pay if it truly saves social face. We put it through the rounds to find out.

To test the Etiquette Checker's fetor-detecting capabilities, not to mention the effectiveness of a dozen gums, mints, and other maskers, our writer soiled his mouth with garlicky onion dip and coffee, then exhaled. He's judged twice: first by the breathalyzer, then by his wife.

The Verdict on the Topland Etiquette Checker? In our machine-versus-human showdown, the breath analyzer's read deviated from the human experience 43 percent of the time, which is awfully high for something that green-lights breathing on strangers. Listen to your wife instead.