Less cavities? Use this instead of sugar 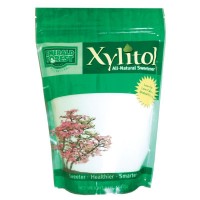 Some 120 years ago German chemist, Emil Fisher and French chemist, M.G. Bertrand discovered the natural occurring sugar substitute xylitol. In the early 1940's Finland began to use xylitol in place of sucrose. In the early 1970's the University of Turku in Finland began to research xylitol and were able to document significant dental benefits from consumption of xylitol.

Xylitol sweetened gum appeared in Finland and in the United States in 1975. While Finland embraced the gain in oral health by utilizing xylitol, the United States did not. For questions and answers about xylitol, see the site referenced below.

Forward to the twenty first century and the inception of Minimally Invasive Dentistry (MI Dentistry) across the United States. Dentistry and dental hygiene are now looking to xylitol to assist in the prevention of dental caries. Xylitol is proving to be an ace in "preventing" the hole!

What is the cause of cavities?.
The etiology of caries involves teeth, cariogenic bacteria, and fermentable sugars. Change one facet of the equation and the difference is a great reduction in decay. The most logical and easiest fix is to introduce a non-fermentable sugar, like xylitol. The magic lies in its five carbon structure.
Cariogenic bacteria, namely mutans streptococci, cannot metabolize xylitol.
No metabolization = no acid production.

With no acid the pH of the mouth remains basic and prevents episodes of demineralization. No metabolization also results in no formation of sticky plaque. No plaque means strep mutans can not stick around and cause decay.

No more old school dentistry
Old school dentistry focused on thefilling of holes. The focus of MI Dentistry is the early detection of demineralized areas so remineralization can take place with only minimal intervention from dentistry. With the utilization of xylitol maybe someday the focus will be "NIN" dentistry … No Intervention Necessary Dentistry.
Let's hope it doesn't take another 120 years! It really isn't rocket science!